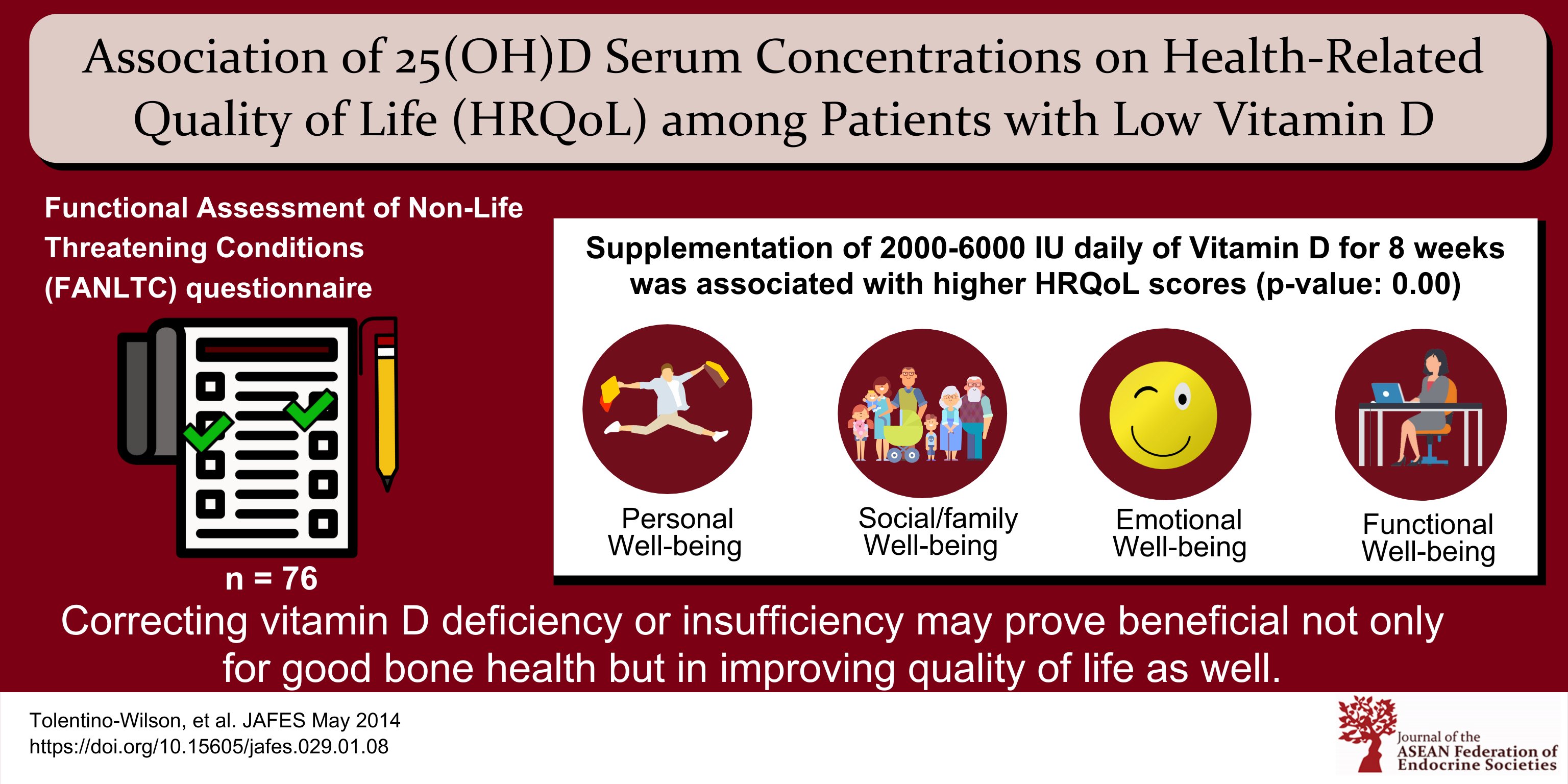 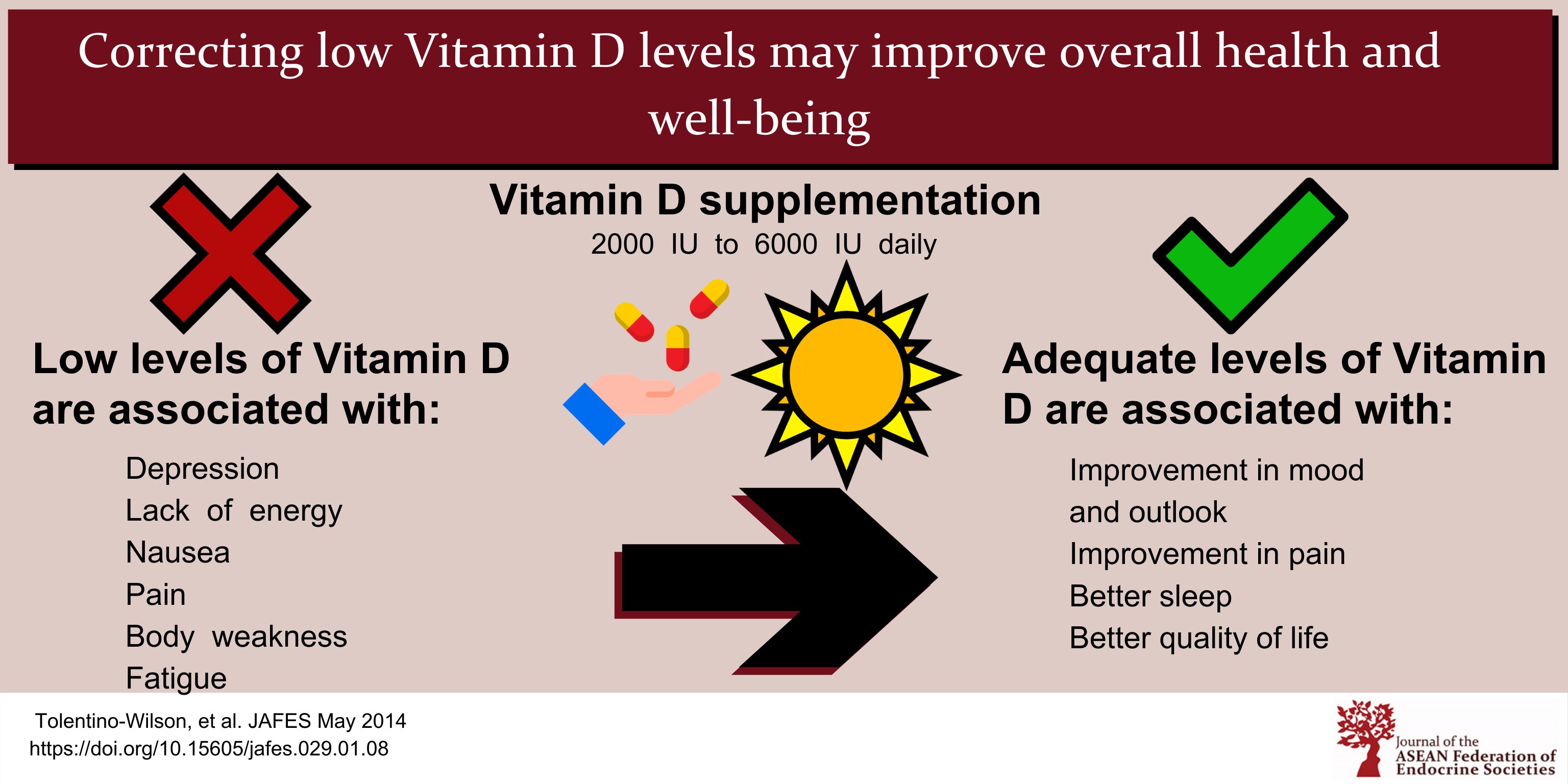 Methodology. This prospective cohort study included 76 patients (ages 18 to 59; 54 females and 22 males) who had baseline 25(OH)D below 30 ng/ml and were prescribed a Vitamin D supplement for eight weeks. HRQoL was assessed at baseline and after 8 weeks through the Functional Assessment of Non-Life Threatening Conditions (FANLTC) questionnaire.

Conclusion. The improved HRQoL scores after Vitamin D supplementation showed that there is a significant association between 25(OH)D serum concentrations and HRQoL.

Methodology. This prospective cohort study included 76 patients (ages 18 to 59; 54 females and 22 males) who had baseline 25(OH)D below 30 ng/ml and were prescribed a Vitamin D supplement for eight weeks. HRQoL was assessed at baseline and after 8 weeks through the Functional Assessment of Non-Life Threatening Conditions (FANLTC) questionnaire.

Conclusion. The improved HRQoL scores after Vitamin D supplementation showed that there is a significant association between 25(OH)D serum concentrations and HRQoL.

Vitamin D is produced in the skin during sun exposure. Season, latitude, time of day, skin pigmentation, aging and sunscreen use all influence the cutaneous production of vitamin D3.1 For most inherently medium to dark-skinned ethnic groups like Filipinos, a half-hour under the tropical sun produces 20,000 to 30,000 IU vitamin D within 24 hours of exposure.2 However, despite having year-round sunshine in the Philippines, there are plenty of Vitamin D deficient patients with different symptoms and presentations at diagnosis. In December 2010, Vitamin D deficiency was flagged as a major health concern in South Asia.3

Vitamin D deficient patients may present with muscle aches, unexplained weakness, bone pains and psychological disturbances which may suggest other diseases (fibromyalgia, chronic fatigue, age-related weakness, or even depression) due to the nonspecific nature of its symptoms.4 Because of this, patients are subjected to a multiple diagnostic exams to determine the cause of symptoms that may be debilitating enough to affect the patient’s daily life. Moreover, low levels of vitamin D are also linked to other conditions including increased risk of fracture, abnormal bone metabolism, diabetes mellitus, asthma and susceptibility to infections.5

The Endocrine Society Clinical Practice Guideline (CPG) released in July 20116 recommends using the serum circulating 25(OH)D level, measured by a reliable assay, to evaluate vitamin D status. The Institute of Medicine (IOM) committee has determined that the level of 25(OH)D that is needed for good bone health for most individuals is 20 ng/ml. However, several sources say that this cut-off is too low. The aforesaid CPG reported that a 25(OH)D equal to or less than 20 ng/ml is considered as Vitamin D Deficiency while a 25(OH)D level of 21 to 29 ng/ml is considered as Vitamin D insufficiency and provided recommendations for its management.

The wide range of manifestations of Vitamin D deficiency and the financial burden of multiple diagnostic examinations for nonspecific signs and symptoms could potentially affect the quality of the patients’ lives. To date, there is a dearth of published studies along this line in the foreign, and more so, in the local setting, hence the impetus for this study which has the following objectives:

1. To determine the association between 25(OH)D serum concentrations and health-related quality of life (HRQoL) among patients with low vitamin D.

The investigation was a prospective cohort study.

Patients who were 18 to 60 years old with a baseline Vitamin D level below 30ng/ml who were prescribed vitamin D supplementation between 2000 IU to 6000 IU daily were included. The dosage per patient varied according to the clinical practice guidelines.6

Patients who had cancer, uncontrolled hypertension, congestive heart failure, chronic kidney disease requiring dialysis, poorly controlled diabetes, chronic lung disease, those who had hyperphosphatemia, and/or hypercalcemia, who were bedridden, with known psychiatric illness, or who needed assistance in everyday living were excluded in the study.

Qualified patients who agreed to participate were asked to sign a written informed consent form.

Using a 95% CI for the proportion of eligible patients who will complete the assessment form, with a margin of error (ME) of 0.05 and an estimated completion rate of 75%, the required sample for this study was at least 75 patients.

Serum 25(OH)D concentrations were analyzed using Electro-chemiluminescence binding assay (ECLIA) (Cobas, Roche). Results are determined via an instrument-specific calibration curve which is generated by 2-point calibration and a calibration master curve provided via the reagent barcode.

To measure HRQoL, the Functional Assessment of Non-Life Threatening Conditions (FANLTC) questionnaire from the Functional Assessment of Chronic Illness Therapy (FACIT) measurement system, a collection of validated HRQoL questionnaires targeted to the management of different types of illnesses, was used.7 The FANLTC has also been used in other studies (e.g. involving patients who underwent bilateral breast reduction surgery,8 among persons with disabilities).9

The FANLTC measures HRQoL in patients with non-life threatening illnesses on four aspects (subscales) – physical well-being (I have a lack of energy; I have nausea; Because of my physical condition, I have trouble meeting the needs of my family; I have pain; I am bothered by side effects of treatment, I feel ill, I am forced to spend time in bed), social/family well-being (I feel close to my friends; I get emotional support from my family; I get support from my friends; My family has accepted my illness; I am satisfied with family communication about my illness; I feel close to my partner or the person who is my main support; I am satisfied with my sex life), emotional well-being (I feel sad, I am satisfied with how I am coping with my illness, I am losing hope in the fight against my illness, I feel nervous, I worry that my condition will get worse) and functional well-being (I am able to work, My work is fulfilling, I am able to enjoy life, I have accepted my illness, I am sleeping well, I am enjoying the things I usually do for fun, I am content with the quality of my life right now).

Response categories for the foregoing items consisted of the following: not at all, a little bit, somewhat, quite a bit, and very much, referring to how often they have experienced the statements in the questionnaire 7 days prior to answering. For positively stated items, the said response categories yielded scores of 4, 3, 2, 1, and 0, respectively. For negatively stated items, the scores were reversed. Answers to individual items per subscale were summed after performing the necessary reversals. The sum of the item scores were then multiplied by the number of items in the subscale, then divided by the number of items answered. This produced the subscale score. The subscale scores were then added to derive the total FANLTC score. Higher scores meant better HRQoL.9

FACIT provided the validated questionnaire in English version as well as the translated version in Filipino.

Independent samples t-test and Mann-Whitney tests were carried out to test differences between groups in terms of mean or median HRQoL scores, respectively. For comparisons of pre- and post-Vitamin D supplementation data on HRQoL, Wilcoxon Signed Ranks test was used.

A p-value less than 0.05 was considered significant. All statistical computations were performed using Stata/IC 13.

Out of 94 patients screened for eligibility, 82 patients were initially included but only 76 patients completed the study. Baseline demographics showed predominance of females (71% vs. 29%). Patient age range was 18 to 59 years, with a mean age of 40 ±10.7 years and median age of 45 years. [Table 1] 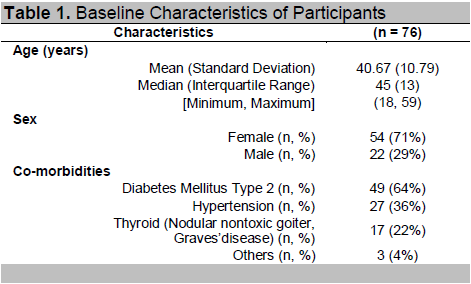 Table 2. 25(OH)D Levels Before and After Supplementation

The HRQoL of the study participants who were Vitamin D deficient and insufficient at baseline were basically the same (p-values > 0.05) except for their social/family well-being where a slightly higher median score was noted for those who were Vitamin D insufficient as compared to those who were Vitamin D deficient (15 vs. 13, p=0.031). All the median / mean HRQoL subscale and total scores were below half of the maximum score except for the median for social/family well-being, which was slightly above 14 [Table 3].

Moreover, after supplementation, all the HRQoL subscale scores as well as the total HRQoL scores of the study participants were significantly higher than their baseline HRQoL scores (p-values < 0.05). [Table 5]

Table 5. Comparison of HRQoL Scores before and after Vitamin D Supplementation

This study examined the association between Vitamin D level and HRQoL. Data obtained at the start of the study showed that patients with Vitamin D level less than 30 ng/ml had lower HRQoL scores. In a report on the association of mood and vitamin D levels presented at the 94th Endocrine Society Congress in Houston, Texas in June 2012,10 vitamin D deficiency was correlated with exacerbation of depression with improvement in the mood in patients with vitamin D supplementation. The patients’ mood and outlook as reflected by their social disposition and attitude towards their family were reflected in this study by the low HRQoL scores.

After receiving vitamin D supplementation for 8 weeks, the repeat HRQoL test showed significant improvement. Other studies also reported positive benefits of correcting Vitamin D deficiency or insufficiency with regards to patients’ symptoms such as lack of energy, nausea, pain, body weakness and fatigue. In a case series by Huang, et al.,11 vitamin D supplementation in vitamin D deficient or insufficient patients resulted to improvement in pain, sleep, and QoL except for role-functioning and emotional QoL relative to baseline. In another study involving patients with mild-to-moderate Crohn’s disease, quality-of-life scores also improved following vitamin D supplementation.12 The present study reflected similar results as evidenced by the significant improvement in the HRQoL scores of patients from baseline to 8 weeks, although other factors that might have contributed in the patients’ improved HRQoL scores cannot be totally ruled out.

The main limitation of this study is that the HRQoL questionnaire tool used is not specific for patients with Vitamin D deficiency. Although it has been used for patients who underwent bilateral breast reduction surgery8 and among persons with disabilities,9 no other study evaluating Vitamin D deficient patients with this questionnaire has been found. Moreover, this study may be improved with a control group (with sufficient vitamin D at baseline), longer study duration for more stable results in the HRQoL and vitamin D level difference, larger sample size, and controlled intervention i.e., dose of vitamin D given to patients.

Nevertheless, this study reinforces that vitamin D acts as an indicator of overall health and well-being. Vigilance in maintaining a normal vitamin D status should be a high priority for physicians. Surveillance for vitamin D deficiency, with measurement of 25(OH)D concentrations should be part of yearly physical examinations.1 Findings of this study indicate that correcting vitamin D deficiency or insufficiency in our patients may prove beneficial not only for good bone health but in improving their quality of life as well.

The improved HRQoL scores after Vitamin D supplementation showed that there is a significant association between 25(OH)D serum concentrations and HRQoL among patients with low vitamin D.

11. Huang W, Shah S, Long Q, Crankshow AK, Tangpricha V, Improvement of pain, sleep and quality of life in chronic pain patients with vitamin D supplementation. Clin J Pain. 2013 Apr; 29(4):341-7. 12. Yang L, et al. Therapeutic effect of vitamin D supplementation in a pilot study of Crohn’s patients. Clin Transl Gastroenterol. 2013; 4:e33. Disclaimer Articles and any other material published in the JAFES represent the work of the author(s) and should not be construed to reflect the opinions of the Editors or the Publisher.
Authors are required to accomplish, sign and submit scanned copies of the JAFES Declaration that the article represents original material that is not being considered for publication or has not been published or accepted for publication elsewhere.
Consent forms, as appropriate, have been secured for the publication of information about patients; otherwise, authors declared that all means have been exhausted for securing such consent.
The authors have signed disclosures that there are no financial or other relationships that might lead to a conflict of interest. All authors are required to submit Authorship Certifications that the manuscript has been read and approved by all authors, and that the requirements for authorship have been met by each author.
↑ Back to Top