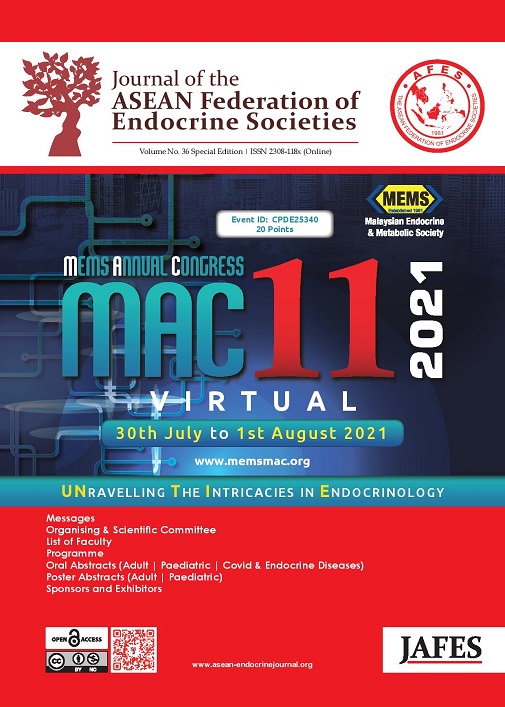 INTRODUCTION
Acromegaly is usually caused by a growth hormonesecreting pituitary adenoma, mainly macroadenoma. Pregnancies are relatively rare in patients with acromegaly due to high incidence of hypopituitarism. There is limited data on management of acromegaly in pregnancy and also insufficient data available about use of octreotide LAR in pregnant women with acromegaly. Clinical activity of acromegaly during pregnancy has been variably reported with some improving, some remaining stable and some worsening. Prevalence of headache in patients with acromegaly varies from 37 to 87%. In the American registry of pituitary tumors, headache was reported in 40% of patients with acromegaly. This form of acromegalyassociated headache may even worsen during pregnancy.
RESULTS
We describe a 34-year-old nurse with onset of hypertension at 19 years of age. 4 years later, she was diagnosed with acromegaly. Pituitary MRI showed a left pituitary macroadenoma measuring 1.5 x 1.5 x 0.8 cm with welldefined lobulated margin. She underwent endoscopic transsphenoidal surgery and was started on octreotide LAR due to persistent disease. Six years later, she conceived spontaneously and octreotide LAR was discontinued as the disease was controlled with normalization of IGF-1 level. Her pregnancy was uneventful during the first and second trimester. However, she developed severe headache associated with vomiting and high blood pressure at 32 weeks gestation. She was started on short acting octreotide 50 mcg three times per day for a week with concomitant octreotide LAR 30 mg. The headache improved and blood pressure was controlled subsequently. She safely delivered a healthy baby girl via caesarean section at 38th week of gestation.

CONCLUSION
Pregnancy in women with acromegaly is generally safe with tumoral and hormonal stability. Treatment interruption at pregnancy confirmation has proven to be safe. This case highlights the fact that medical therapy with octreotide LAR should be considered in a pregnant patient with significant headache. Short-acting somatostatin analogue can be initiated together with long-acting somatostatin analogue to get immediate effects

This work is licensed under a Creative Commons Attribution-NonCommercial 4.0 International License.