Objective. Previous studies have demonstrated the role of genetic susceptibility in the pathogenesis of diabetic nephropathy. The study aimed to determine the frequencies of angiotensin I-converting enzyme (ACE) gene insertion/deletion (I/D) polymorphism in a pilot population of Filipino type 2 diabetic patients and normal controls.

Methods. An analysis of the ACE gene polymorphism was performed in 42 diabetic patients with and without nephropathy, and 24 normal controls. The analysis was done using polymerase chain reaction, restriction enzyme digestion, and gel electrophoresis techniques to determine the polymorphism (II, DD or ID). Independent T-tests and chi-square tests were used to compare clinical characteristics, and logistic regression analysis was done to determine odds ratio for development of nephropathy.

Conclusion. The D allele was more common in patients with diabetic nephropathy, similar to the observation in South Indian patients. Since the study involved only a small pilot group, studies on a larger population is needed to establish the hypothesized role of the D allele in susceptibility to diabetic nephropathy in Filipinos.

Objective. Previous studies have demonstrated the role of genetic susceptibility in the pathogenesis of diabetic nephropathy. The study aimed to determine the frequencies of angiotensin I-converting enzyme (ACE) gene insertion/deletion (I/D) polymorphism in a pilot population of Filipino type 2 diabetic patients and normal controls.

Methods. An analysis of the ACE gene polymorphism was performed in 42 diabetic patients with and without nephropathy, and 24 normal controls. The analysis was done using polymerase chain reaction, restriction enzyme digestion, and gel electrophoresis techniques to determine the polymorphism (II, DD or ID). Independent T-tests and chi-square tests were used to compare clinical characteristics, and logistic regression analysis was done to determine odds ratio for development of nephropathy.

Conclusion. The D allele was more common in patients with diabetic nephropathy, similar to the observation in South Indian patients. Since the study involved only a small pilot group, studies on a larger population is needed to establish the hypothesized role of the D allele in susceptibility to diabetic nephropathy in Filipinos.

Diabetic nephropathy occurs in 20 to 40% of patients with diabetes.1 In the Philippines, it is the underlying cause of 38% of all newly diagnosed renal diseases.2

There is considerable evidence supporting the theory that genetic susceptibility plays a major role in the pathogenesis of diabetic nephropathy. 3-5

One of the genetic modifiers that have been studied in recent years is the angiotensin I-converting enzyme (ACE) gene. The renin-angiotensin system (RAS) is believed to contribute significantly to the pathophysiology of kidney disease. 6

The protein product of the ACE gene is angiotensin I-converting enzyme, which converts angiotensin I into angiotensin II. Angiotensin II has effects on BP regulation and electrolyte balance because of its potency as a vasopressor and an aldosterone-stimulating peptide. Subsequently, high levels of aldosterone cause increased water and sodium reabsorption and increased extracellular fluid volume. Angiotensin II also decreases circulating levels of bradykinin, which is a potent vasodilator. Individual variance of ACE is mostly determined by the insertion/deletion polymorphism, based on the presence (insertion, I ) or absence (deletion, D ) of a 287-bp sequence in intron 16 in chromosome 17. Insertion/deletion polymorphism of this gene produces three genotypes: DD homozygote, II homozygote and ID heterozygote.7,8

Previous investigations have demonstrated that this polymorphism accounts for 47% of the total phenotypic variance of serum ACE, supporting the theory that the ACE gene locus is the major determinant of serum ACE concentration. 9

These explain the development of diabetic glomerulopathy and, possibly, the mechanism of renoprotection by ACE inhibitors (ACE-I) and angiotensin II receptor blockers (ARB). 11

To date, there is no available data on the ACE genotypes in Filipino diabetic patients. Additional evidence supporting a direct association of ACE gene polymorphism with diabetic nephropathy may help in establishing ACE genotype as a prognostic indicator for diabetes and renal disease, and as a predictor for response to pharmacologic treatment with ACE-I or ARB.

Consecutive recruitment of adult Filipino type 2 diabetics consulting at the Diabetes Clinic of a tertiary university-affiliated government hospital was performed. The American Diabetes Association (ADA) criteria for diagnosis of type 2 diabetes mellitus was applied: 1) symptoms of diabetes plus casual plasma glucose concentration equal to or more than 11.1 mmol/L (200 mg/dL), or 2) fasting plasma glucose (FPG) equal to or more than 7.0 mmol/L (126 mg/dL), or 3) two-hour postload glucose equal to or more than 11.1 mmol/L (200 mg/dL) during an oral glucose tolerance test (OGTT) using 75 g anhydrous glucose.14 Normal control was defined as: 1) FPG less than 6.1 mmol/L (110 mg/dL), 2) two-hour postload glucose less than 7.8 mmol/L (140 mg/dL), 3) no history of diabetes mellitus among first-degree relatives (parents and offspring) and siblings, and 4) age of at least 60 years. The normal controls from a previous study in the same institution were anonymized after efforts to secure re-consent were exhausted.15 Patients with type 1 diabetes or established renal disease other than diabetic nephropathy were excluded from the study.

After obtaining informed consent from all recruited subjects, the patients were evaluated based on the following parameters: age, sex, duration of diabetes, presence of comorbid illnesses, body mass index (BMI), blood pressure, glycosylated hemoglobin (HbA1c) (BioRad/Diastat) and nephropathy. Diabetic nephropathy was defined as albuminuria equal to or greater than 20 mg/L in a spot urine collection (Micral II, Roche) in the absence of heart failure, infection and strenuous activity.16

DNA from each blood sample was obtained using the QiAmp Midi Kit (Qiagen, Germany). Nested PCR was performed in a single tube to directly extend the insertion. The first PCR step used primers that amplified intron 16 across the insertion [GIIS: 5’ CTC AAG CAC GCC CCT CAC AGG ACT G 3’; GAS: 5’ GAT GTG GCC ATC ACA TTC GTC AGA T 3’]. The 50-μL reaction mixture contained 2 mM MgCl2, 0.25% DMSO, and 2.5 U GOLDSTAR DNA polymerase (Eurogentec, Seraing, Belgium), along with 400-pM primer concentrations. The template DNA was denatured for 1.5 minutes at 95°C before undergoing 15 cycles of denaturation for 1 minute at 95°C, primer annealing for 1 minute at 62°C, and extension for 1 minute at 72°C. The mixture was briefly cooled to 4°C, and GIIS and a primer corresponding to the insertion sequence [FYM: 5’ ATC ACG AGG TCA GGA GAT CGA GAC 3’] were added to the mixture. The new mixture underwent another 15 cycles in the same conditions. The first set of primers produced a 561-bp product for the I allele, and a 274-bp product for the D allele (Figure 1). The second set produced a 376-bp fragment only in the presence of the I allele. In this method, the initial amplification of intron 16 allowed greater sensitivity and specificity in detecting the insertion, which is an Alu repeat-type sequence.

Baseline characteristics were compared using T-tests for continuous variables and chi-square tests for categorical variables. After obtaining the frequency distribution of the ACE genotypes, logistic regression analysis was used to determine the odds ratio.

Ethical approval for the study was obtained from the Research Implementation and Development Office of the University of the Philippines Manila. 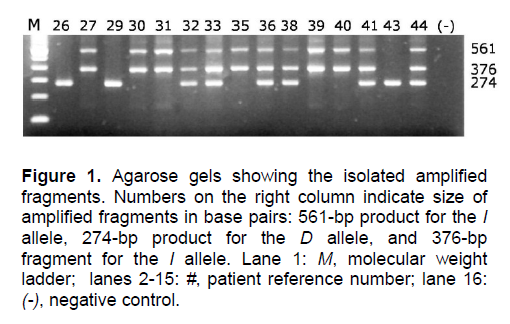 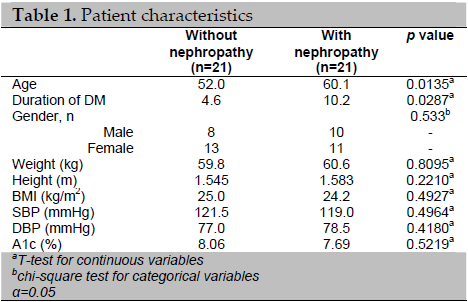 The study sought to analyze the ACE gene polymorphisms in a small population of Filipino diabetic patients and controls and the risk for developing diabetic nephropathy. The II polymorphism appeared to be more frequent in diabetic patients without nephropathy. In contrast, the D allele was more commonly seen in patients with diabetic nephropathy. These results are similar to but not thoroughly consistent with the findings in the Japanese and South Indian type 2 diabetic patients, and in the meta-analysis of both type 1 and type 2 diabetic patients.7,12,13 Phylogenetic, archaeologic and linguistic data suggest that Filipinos are Austronesian people, a group that includes Southeast Asian, Madagascar and Pacific island ethnicities. Subsequent colonization has also brought limited genetic influences from populations from Europe, America and other parts of Asia. 17 This may explain the varied findings in genetic studies across close Asian neighbors.

The presence of the D allele is associated with higher circulating levels of ACE, which is thought to increase the activity of the RAS system. In diabetic individuals who have chronic hyperglycemia leading to endothelial dysfunction, increased stimulation of the RAS system may more likely increase intraglomerular pressure, protein leakage, and subsequent destruction of nephrons. It is interesting to note that the odds of developing diabetic nephropathy were increased close to five-fold in those with ID polymorphism, but only almost three times in those with DD polymorphism. As the population size is small, it is difficult to make valid inferences regarding the possible significance of this heterozygosity in the development of diabetic nephropathy.

The pilot study was limited primarily by its small population size, absence of age- and sex-matched controls, and information pertaining to ethnic background of the subjects. With these findings, it is encouraging to investigate the association of diabetic nephropathy with polymorphisms in the ACE gene in a wider population of Filipino patients.

The presence of the D allele appears to be the common finding in studies on diabetic nephropathy on Asian populations. Genetic studies on larger populations of type 2 diabetic patients are needed to investigate the hypothesized role of the D allele in susceptibility to the development of nephropathy, to advance the current knowledge of the mechanisms involved in the development of this important cause of renal disease, and to possibly aid in the selection of appropriate therapy for the prevention or delay of progresssion of nephropathy.

This study was supported by a research grant from the National Institutes of Health (NIH) and the Research Implementation and Development Office of the University of the Philippines Manila.

We thank Mr. Eric Christian Abaya of the Institute of Human Genetics for the genetic analyses and Dr. Dennis Quiambao of the Department of Clinical Epidemiology of the University of the Philippines College of Medicine for the statistical analyses. We would also like to thank Dr. Mia Fojas, Mrs. Au Laurel, Ms. Analyn Palomar, Ms. Rachel Manansala, Ms. Gemma Abquina of the Medical Research Laboratories of the Philippine General Hospital for their assistance.

9. Rigat B, Hubert C, Alhenc-Gelas F et al. An insertion/deletion polymorphism in the angiotensin I- converting enzyme gene accounting for half the variance of serum enzyme levels. J Clin Invest 1990;86:1343-6.

13. Ng DPK, Tai BC, Koh D et al. Angiotensin-I converting enzyme insertion/deletion polymorphism and its association with diabetic nephropathy: A meta-analysis of studies reported between 1994 and 2004 and comprising 14,727 subjects. Diabetologia 2005;48:1008-16.