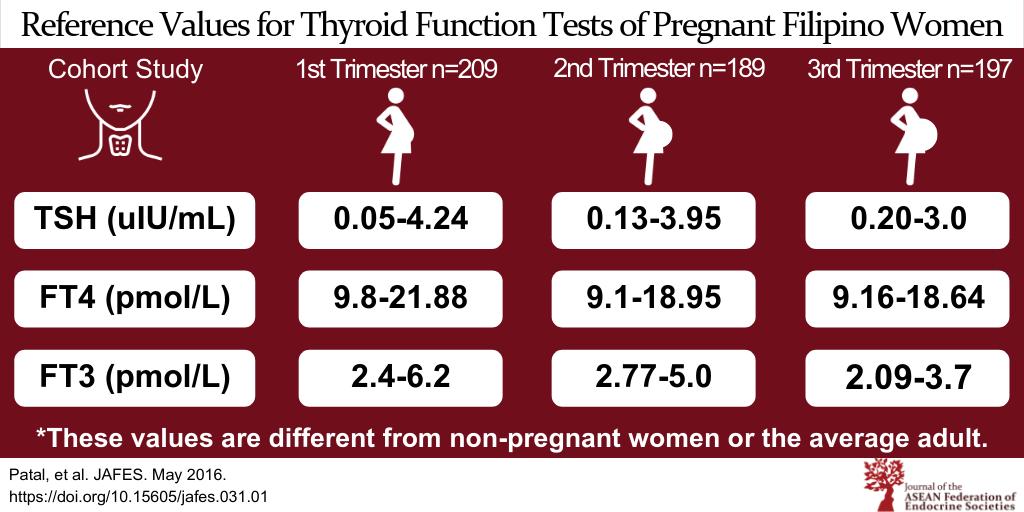 
Background. The interpretation of thyroid hormone function during pregnancy is difficult due to its physiologic changes. Differences in iodine status in previous studies led to different intervals; therefore the use of trimester-specific, method-specific and probably country-specific reference values is advocated.

Main outcome measures are trimester-specific reference interval based on 2.5th and 97.5th percentiles for TSH, FT4 and FT3 among TPOAb-negative pregnant patients.

Conclusions. Trimester-specific intervals among pregnant Filipino women are different from their non-pregnant counterparts and laboratory cutoffs. Thus, these reference values should be used in the country.

Background. The interpretation of thyroid hormone function during pregnancy is difficult due to its physiologic changes. Differences in iodine status in previous studies led to different intervals; therefore the use of trimester-specific, method-specific and probably country-specific reference values is advocated.

Main outcome measures are trimester-specific reference interval based on 2.5th and 97.5th percentiles for TSH, FT4 and FT3 among TPOAb-negative pregnant patients.

Conclusions. Trimester-specific intervals among pregnant Filipino women are different from their non-pregnant counterparts and laboratory cutoffs. Thus, these reference values should be used in the country.

Optimal thyroid function is essential during all stages of life. This is most significant during gestation when the fetus is reliant on the transplacental supply of thyroxine which is important for normal neurological development. Studies correlate maternal hypothyroxinemia to the offsprings' delayed mental and motor function1 and higher TSH to lower IQ scores.2 Other adverse maternal and fetal outcomes are also significantly correlated, specifically: subclinical hypothyroidism to fetal deaths,3 placental abruption and premature delivery;4 and subclinical hyperthyroidism to gestational hypertension.5

However, interpretation of thyroid function tests in pregnancy can be difficult due to some physiologic changes, which include (1) decreased TSH during the first trimester due to stimulatory effect of human chorionic gonadotropin (hCG) which has structural similarity with TSH; (2) increased thyroid binding globulin (TBG) due to estradiol and altered hepatic glycosylation decreasing its clearance; (3) increased urinary iodide excretion which can cause impaired thyroid hormone production in areas of marginal iodine sufficiency; and (4) alterations in the immune system, leading to the onset, exacerbation, or amelioration of an underlying autoimmune thyroid disease.6

Studies in different parts of the world have been conducted to establish laboratory and method-specific thyroid function tests across 3 trimesters of pregnancy - in iodine-sufficient areas like the USA,7 Switzerland,8 Spain9 and in iodine-insufficient areas like China10 and Iran.11 The Philippines is considered to no longer iodine deficient as reported by the Food and National Research Institute in 2013 with the exception of pregnant women. Data persistently showed that they are iodine deficient.12

We recruited 616 healthy women with uncomplicated single intrauterine gestation attending the Philippine General Hospital Obstetrics and Gynecology Outpatient Department, a tertiary medical center in Manila, Philippines. History taking was done to ascertain any chronic illness, thyroid illness in the past or present, medications (current and past) and family history of thyroid illness. Obstetric history was elicited to know duration of gestation, number of pregnancies, number of pregnancies carried to term and number of abortions. Physical examination was done by the investigator who is a trained endocrinologist to ascertain absence of goiter. The age of gestation was computed from the last normal menstrual period. For those with irregular menses, transvaginal ultrasound was performed to ascertain the age of gestation.

This study was approved by the Ethics Review Board of the Philippine General Hospital.

Five mL of blood were extracted from each subject and the serum were assayed for anti-TPO, FT4, FT3 using radioimmunoassay (RIA) method and for TSH using immunoradiometric assay (IRMA) with the Perkin Elmer machine (2008, USA). The reference range in our laboratory is: TPO ( Data Analysis

Reference intervals for FT4, FT3 and TSH were determined by calculating the 2.5th and 97.5th percentiles in Microsoft Excel. Median values for FT4, FT3 and TSH were likewise determined for descriptive purposes. The median, 2.5th and 97.5th percentile plots were derived using 6th-order polynomial equation in Microsoft Excel with the age of gestation on the x-axis and the thyroid function test values on the y-axis. The percentile plots are used to find the overall trend in the test parameters for increasing age of gestation.

A priori wise comparisons between the median FT4, FT3, and TSH values during the first and second trimesters and during the second and third trimesters were performed using Mann-Whitney U tests.

Six hundred sixteen (616) healthy pregnant patients were recruited from the Philippine General Hospital Obstetrics and Gynecology outpatient clinic. Of these subjects, 218 were in the first trimester, 198 in the second trimester and 200 in the third trimester. Eight patients each in the first and second trimester and three patients in the third trimester were TPOAb-positive. These nineteen patients were removed from the analysis because the presence of TPOAb is predictive of subsequent thyroid dysfunction. In a nine year prospective study, women with subclinical hypothyroidism and positive TPOAb are 15.6 times more likely to convert to overt hypothyroidism.15 The prevalence of TPOAb positivity (3.08%) in this study is lower than the worldwide prevalence of 12-23%.9,13,14 One subject in her first trimester of pregnancy, and another subject in the second trimester were removed from the analysis due to overt hypothyroidism and hyperthyroidism respectively.

Five hundred ninety-five (595) subjects were included in final analysis. Mean age was 27and SD = 5.95 years. Primigravids represented 38% of all subjects, 32% were on their second pregnancy and the remaining 30% were on their third or more pregnancies.

Table 1 shows the trimester-specific reference intervals and median values for TSH, FT4 and FT3 based on data from 595 subjects included in the study. The median, 2.5th and 97.5th percentile plots are shown in Figure 1. 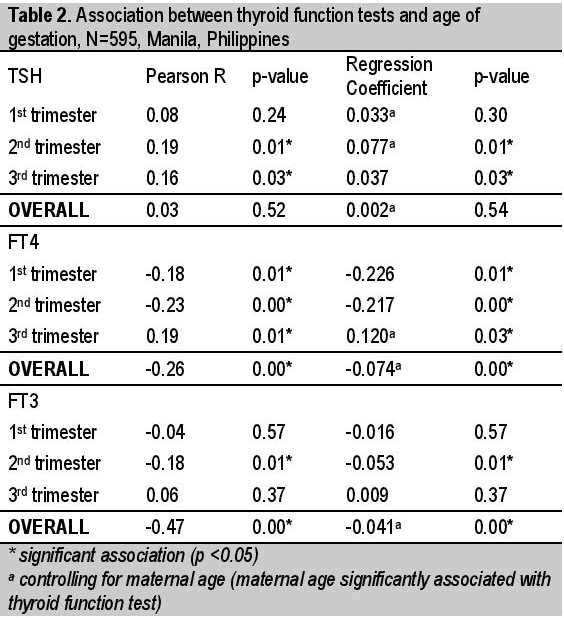 The 2.5th percentile TSH values in our study are 0.05, 0.13 and 0.20 uIU/mL respectively. These values are lower than the laboratory cut off of 0.30 uIu/mL. The lowest TSH is observed in the first trimester consistent with all studies done abroad and maybe due to high levels of β-hCG early in pregnancy. In the first trimester, there is no correlation between the TSH and the age of gestation with p value of 0.24. However, during the second and third trimester, there is a statistically significant positive correlation between TSH and the age of gestation, both with p values of 0.01 and 0.03 respectively. This implies that as the age of gestation increases, the TSH also increases. Using multiple pairwise comparison, median TSH in the first and 2nd trimester showed marginally significant rise (1.2 vs 1.4 p=0.06) while median TSH in the 2nd and 3rd trimester did not differ (1.4 vs 1.4 p=0.62). Our median TSH values across all trimesters are higher than in studies done in USA,7 Switzerland,8 Spain,9 and China10 and may be due to iodine-insufficient status in our pregnant women. The study in Iran11 showed the highest median TSH values for all trimesters [Table 3]. 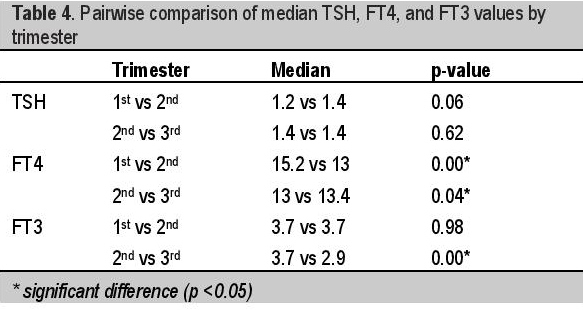 The paper entitled, "Reference Intervals in Thyroid Function Tests in the Third Trimester in Pregnant Filipino Women," by Baustista, et al16 is part of this study. There were minor differences in the reported thyroid function tests in the first and second trimester reference intervals as we have removed overtly hyperthyroid and hypothyroid patients in the final analysis.

Trimester-specific reference interval derived from antibody-negative patients in this study is used to classify thyroid function tests as high (above 97.5th percentile), normal (within 95th central percentile) and low (below 2.5th percentile) and were compared with classification using the non-pregnant assay-specific reference interval provided by the manufacturer. If non-pregnant cut offs were used to classify our patients - 25 in the first trimester, 3 in the second trimester and 4 patients in the third trimester will be misclassified into subclinical hyperthyroidism due to low TSH. The highest difference is noted in the first trimester due to expectedly low TSH as a function of β-hCG [Table 5]. FT4 rises in the first few weeks of pregnancy and declines progressively at the end of the first trimester and in the second trimester [Figure 1] but they were all lower than laboratory cut off (9.83, 9.10, 9.16 vs 11 pmol/L). Using non-pregnant cut off - 4, 28 and 19 patients respectively will be misclassified to low FT4. Most number will be misclassified in the second trimester as FT4 is at its lowest at this time in present study.

Figure 1. The scatterplot of individual results for TSH, FT3 and FT4 in pregnant women.

Reference interval for thyroid function tests in pregnancy differs from non-pregnant patients and/or laboratory cut offs and will lead to misclassification of patients, hence pregnancy-specific reference interval should be advocated.

All authors have given approval to the final version submitted.

All the authors declared no conflicts of interest.

This study was supported by the financial grant from Philippine Society of Endocrinology, Diabetes and Metabolism (PSEDM).

Authors are required to accomplish, sign and submit scanned copies of the JAFES Author Form consisting of: (1) the Authorship Certification that the manuscript has been read and approved by all authors, and that the requirements for authorship have been met by each author, (2) the Author Declaration that the article represents original material that is not being considered for publication or has not been published or accepted for publication elsewhere, (3) the Statement of Copyright Transfer [accepted manuscripts become the permanent property of the JAFES and are licensed with an Attribution-Share Alike-Non-Commercial Creative Commons License. Articles may be shared and adapted for non-commercial purposes as long as they are properly cited], (4) the Statement of Disclosure that there are no financial or other relationships that might lead to a conflict of interest. For Original Articles involving human participants, authors are required to submit a scanned copy of the Ethics Review Approval of their research. For manuscripts reporting data from studies involving animals, authors are required to submit a scanned copy of the Institutional Animal Care and Use Committee approval. For Case Reports or Series, and Images in Endocrinology, consent forms, are required for the publication of information about patients; otherwise, authors declared that all means have been exhausted for securing such consent. Articles and any other material published in the JAFES represent the work of the author(s) and should not be construed to reflect the opinions of the Editors or the Publisher.