Tuberculous Abscess of the Thyroid

Tuberculosis (TB) of the thyroid gland is rare, with acute abscess formation being the least common form of presentation. As such, TB of the thyroid may be overlooked as an initial clinical impression. A careful approach by history, physical examination, laboratory testing and radiologic imaging may aid in defining the etiology of the thyroid abscess, but these remain nonspecific. An accurate diagnosis may only be made by histologic examination. We present a case of a tuberculous abscess of the thyroid gland in a 37-year-old female. TB of the thyroid should also be considered when evaluating patients presenting with a painful thyroid nodule.

Tuberculosis of the thyroid gland is a rare disease entity, even in patients with impaired immunity.1 Thyroid infections rarely occur because of the antibacterial properties of colloid material, rich vascularity and abundant iodine levels.2 As such, it is uncommon to suspect a thyroid nodule to be of tuberculous origin and is seldom considered as a differential diagnosis. We present the case of a patient with thyroid abscess, subsequently found to have chronic caseating granulomatous inflammation on histopathologic examination consistent with tuberculosis.

A 37-year-old Filipino woman presented with an anterior neck mass of almost 3 months. A few weeks prior to consult, she noted a sudden increase in the size of the neck mass, associated with pain and dysphagia. She was clinically euthyroid and did not have fever, weight loss or anorexia. She was diagnosed with rheumatic heart disease (RHD) in 2008. She had been maintained on benzathine penicillin 1.2 million units IM once a month, clopidogrel 75 mg OD and atenolol 12.5 mg OD with good compliance. She had no previous hospital admissions. She had no history of tuberculosis, thyroid disease or diabetes mellitus. The patient’s 11 year-old son was diagnosed with primary complex patients in 2008 and was adequately treated.

On examination, she was afebrile and had normal vital signs. There was a 3 cm x 4 cm tender nodule at the left paramedian anterior aspect of the neck that moved freely with deglutition. The surface was smooth, and was firm to hard in consistency. There was no cervical lymphadenopathy. The rest of the physical examination was unremarkable.

Ultrasound-guided fine needle aspiration (FNA) of the described mass yielded 5 mL of thick, purulent material. She was then managed as a case of acute thyroiditis and was treated empirically with Amoxicillin/clavulanic acid 625mg tablet twice daily for 7 days. She was also prescribed with non-steroidal anti-inflammatory agents for the pain and swelling which afforded temporary relief of her symptoms. However, the aspirate did not reveal any growth on routine culture.

On a follow-up visit after 3 weeks, a yellowish discharge was noted in the center of fluctuant swelling with surrounding erythema overlying the skin (Figure 2A). A thyroid sonogram performed at the Endocrine Center of our institution showed that the left lobe of the thyroid had an irregular outline with inhomogenous parenchymal echopattern (Figure 1B

She was referred to Otorhinolaryngology for incision and drainage of the midline neck abscess. Repeat FNA was uninformative yielding only purulent material. The abscess was then unroofed and drained. Purulent material continued to exude through the sinus at the center of the swelling. A contrast-enhanced computerized tomography (CT) scan of the neck was performed to rule out branchial cleft anomalies. The scan revealed an irregular inhomogeneous soft tissue structure measuring 3.0 cm x 3.4 cm x 2.8 cm with an area of hypodensity suggestive of infective fluid collection above and extending into the thyroid lobe (Figure 3A and 3B). Fistulogram showed a subcutaneous blind-ended pouch with contrast pooling, suggestive of an abscess cavity. No fistulous tract into the pyrifrom sinus or other pharyngeal structures was appreciated (Figure 4). Several courses of oral antibiotics were prescribed during the succeeding weeks but without apparent resolution of symptoms. The lists of antibiotics were: cefixime 200mg tablet every 12 hours for 7 days; ampicillin/sulbactam 750 mg tablet every 8 hours for 14 days plus clindamycin 300 mg tablet every 6 hours for 7 days.

Figure 1. Sonogram of the left lobe of the thyroid gland. A, Initial study in sagittal plane, showing the mass measuring 2.1 cm in its antero-posterior diameter, 3.5 cm in its transverse diameter, and 4.1 in its cranio-caudal diameter. B, Repeat study done 3 weeks after initial presentation, showing an irregular outline with inhomogenous parenchymal echopattern. M, mass. 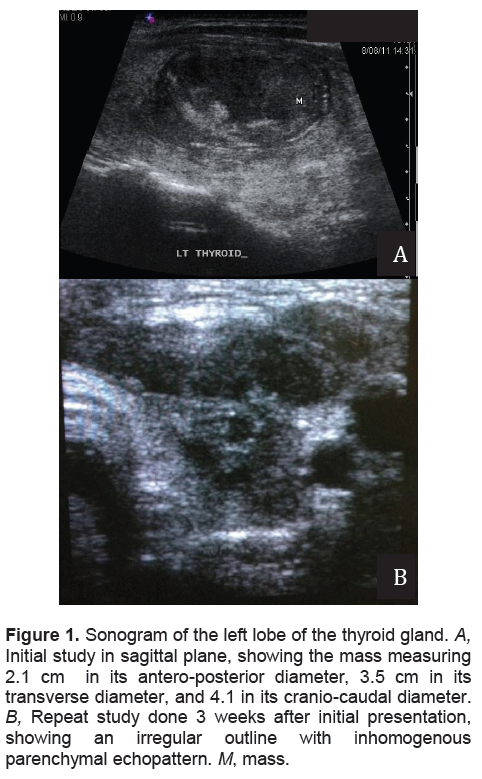 Histopathologic examination of the abscess wall showed chronic granulomatous lymphadenitis with caseation necrosis (Figure 5). Fite-Faraco stain was negative for acid-fast bacilli (AFB). Mycobacterium culture and Mycobacterium tuberculosis polymerase chain reaction (MTB PCR) were likewise negative. Further work up showed a positive Mantoux test with a 16 mm induration. Chest radiograph was normal. There was no evidence of tuberculosis elsewhere. An HIV and methicillin-resistant Staphylococcus aureus (MRSA) screening were negative. The patient was then started on standard quadruple antituberculous therapy (ATT) [pyrazinamide 400 mg + rifampicin 150 mg + ethambutol HCl 275 mg + isoniazid 75 mg/tablet (Myrin®-P Forte) 4 tablets OD]. After 3 to 4 weeks of ATT, there was gradual resolution of the thyroid swelling but with persistence of the non-healing ulcer and abscess (Figure 2B).

Figure 2. Anterior aspect of the neck showing the nodule. A, Before antituberculous treatment, there was a 1 cm x 1 cm ulcer at the midline with yellowish, curd-like exudation. The ulcer was surrounded by granulation tissue and a rim of hypopigmented, indurated skin contiguous with the left paramedian neck nodule. B, 3 weeks after ATT, showing resolution of neck swelling and persistence of ulcer and abscess formation. 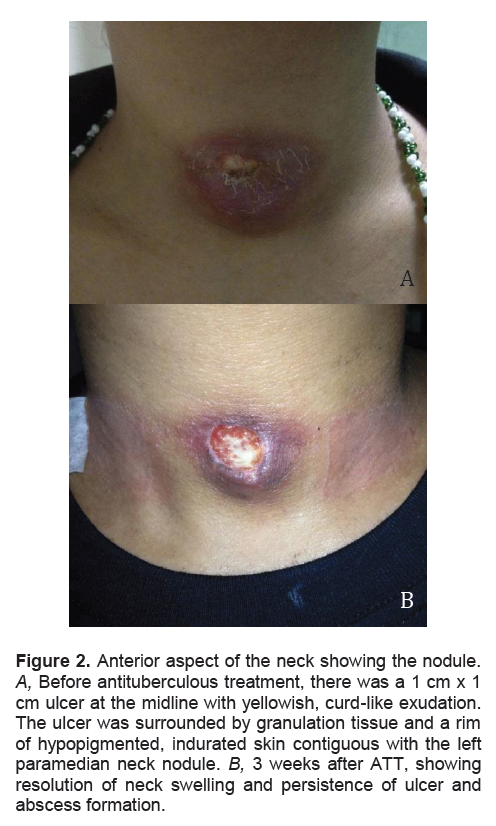 To rule out the possibility of a carcinoma and to establish a definite diagnosis of tuberculosis, the patient subsequently underwent neck exploration and left thyroid lobectomy approximately four weeks after initiation of ATT. She had an uneventful postoperative course. On gross examination, the excised left thyroid and part of the isthmus measured 5 cm x 2.5 cm x 1.6 cm and weighed 10 g. On cut section there was a yellow white, semi-solid, oozing area. Histopathologic examination showed chronic caseating granulomatous inflammation surrounded by epithelioid cells and Langerhans giant cells (Figure 6). There was no evidence of malignancy. Repeat AFB staining and mycobacterial culture were negative. This is probably due to previous anti-kochs therapy. MTB-PCR was likewise negative. A diagnosis of tuberculosis of the thyroid was made on the basis of the histopathologic criteria for TB. The patient was advised to continue quadruple ATT for the first 2 months, followed by maintenance phase triple ATT for another 4 to 6 months.

Figure 3. Axial computed tomography scan of the neck. A, Plain; and B, Contrast-enhanced; showing enhancement of the inhomogeneous nodular hypodense soft tissue lesion (arrow) in the subcutaneous tissue of the anterior neck at the level of the thyroid gland. 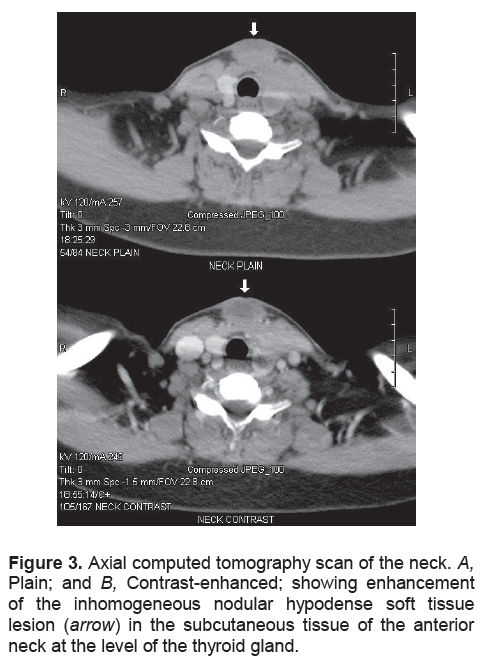 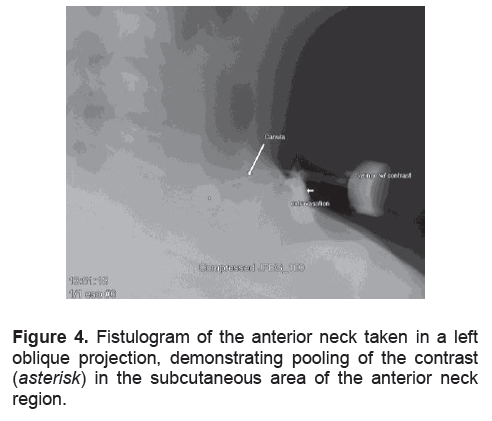 Several tissues are relatively resistant to tuberculous infection. It is uncommon to find tubercles in the heart, striated muscles, pancreas and thyroid. The bactericidal property of colloid material, high blood flow and abundance of iodine are inherent properties that make infections of the thyroid infrequent. Destruction of tubercle bacilli may also be enhanced by increased physiologic activity of phagocytes in hyperthyroidism and the oppressive effect of thyroid hormones on the reproduction of the bacilli.2-4 Thus, tuberculosis of the thyroid gland is very rare, with a reported frequency of 0.1%-0.4%.1

Figure 5. Photomicrograph of the wall of the abscess in hematoxylin and eosin stain at high power magnification showing epithelioid histiocytes consistent with chronic granulomatous lymphadenitis with caseation necrosis (x40). 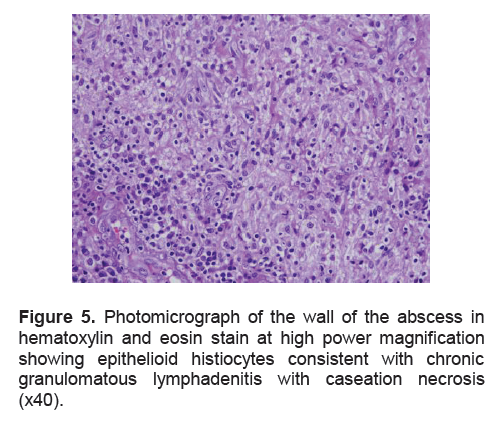 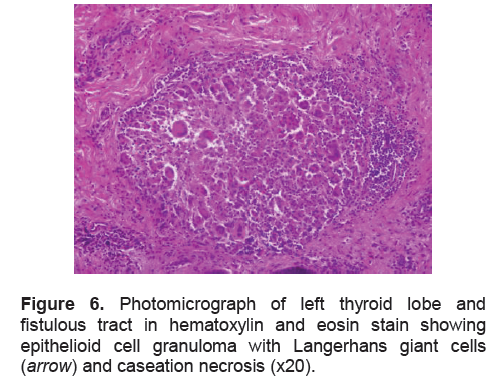 In 1862, Lebert first reported a case of involvement of the thyroid in disseminated military TB. Chiari later described seven more cases of TB of the thyroid from autopsies of patients who died from disseminated miliary TB. The first diagnosis in a living patient was reported by Brunns in 1893, in a middle-aged female presenting with a rapidly enlarging goiter with no TB elsewhere. In 1894, Schwartz described the first case of successful removal of a tuberculous abscess of the thyroid. Rankin and Graham reported 21 cases out of 20,758 patients who underwent partial thyroidectomy in the Mayo Clinic from 1920 to 1931, indicating a prevalence of 0.1% in their cohort. Thereafter, sporadic cases have been reported, but majority were discovered during post-mortem examination. Since 1905, only 76 cases have been reported: 19 of these were seen between 1904 and 1980, while the rest were found later until 2006.3

In the Philippines—with a national incidence of 130 new sputum smear-positive cases per 100,000 population—only two cases of TB of the thyroid have been reported.10,11,12

The less common form is focal caseous tuberculosis of the gland, which may present with localized swelling mimicking carcinoma, a cold abscess formation or as euthyroid nodular goiter. 1,4,5

It may also manifest as subacute thyroiditis, or very rarely, as an acute abscess. 6,7,8

The signs and symptoms of thyroid TB are variable, and are most commonly associated with enlargement of the gland. Thyroid dysfunction is rare, but both hyperthyroidism and hypothyroidism have been reported.1

Seed described 3 prerequisite conditions to be present for the diagnosis of thyroid tuberculosis: the demonstration of acid fast bacilli within the thyroid, a necrotic or abscessed gland, and a definiite tuberculous focus outside the thyroid.9 Histologic and bacteriologic confirmation are adequate to make the diagnosis, so that fulfillment of the third criterion is not essential.Characteristic histologic findings include epithelioid cell granulomas with, peripheral lymphocytic infiltration, and Langerhans giant cells.13 The demonstration of central caseation necrosis is a cytologic finding that is specific to tuberculosis. Other diagnostic tests include chest X-ray, sputum analysis, mycobacterial cultures and MTB-PCR. However in some literature, AFB and culture analysis may not show tuberculosis and PCR can confirm TB in only 55% of the cases. 14,15

In this case, there were no signs and symptoms suggestive of other foci of TB in the body. The demonstration of epithelial cell granulomas with Langerhans giant cells and central caseation necrosis on histopathologic examination made the diagnosis of thyroid tuberculosis.

Antituberculous drugs remain the mainstay of treatment. Surgery may be indicated in the cases of acute abscess formation to avoid total destruction of the thyroid gland. Surgery may also be indicated to establish definite diagnosis when pre-operative workups are ambiguous.

Although seldom observed, tuberculosis should also be considered in the differential diagnosis of nodular lesions of the thyroid, particularly in communities with high TB prevalence. Ultrasound-guided FNAB is a useful diagnostic tool in the work-up of neck masses. In our case, confirmation of the diagnosis of TB of the thyroid was made by histopathologic examination. Treatment was mainly based on ATT. Surgical drainage and eventual thyroidectomy was deemed necessary due to the size of the abscess and establishment of the definitive diagnosis.

14. Mondal Aand Patra D. Efficacy of fine needle aspiration cytology in the diagnosis of tuberculosis of the thyroid gland: A study of 18 cases. The Journal of Laryngology & Otology.1995