A 59-year-old female was referred for asymptomatic hypercalcemia (calcium 12.5 mg/dl, albumin 3.2 mg/dl) detected on routine health check. She complained of having a neck swelling which had not increased over the last 1year. She denied history of bone pains, fractures or renal calculi. She was postmenopausal since 10 years ago and had hypertension for 2 years. She was also diagnosed to have diabetes during the health check up and was started on oral hypoglycaemic agents. Clinically she was euthyroid and had a 5cm × 5cm, firm, well defined neck swelling which moved with deglutition. There was no bruit or lymphadenopathy. There was no family history of any thyroid or parathyroid dysfunction.

Her repeat serum calcium was 11.9 mg/dl, phosphorus 2.1 mg/dl with corresponding PTH levels 879 pg/ml and creatinine 1.6 mg/dl. Ultrasonography (USG) of the neck showed a 7 × 3 cm complex mass on the posterior aspect of the left thyroid lobe sharply demarcated by a capsule with an anechoic 5 × 2 cm cystic area within it (Figure 1,2). USG of the abdomen and pelvis revealed a 1.8 × 1.5cm calculus in the left renal pelvis with mild hydronephrosis. Her parathyroid sestamibi scan showed retention of tracer in the left lower pole of the thyroid gland on delayed images suggestive of parathyroid adenoma. 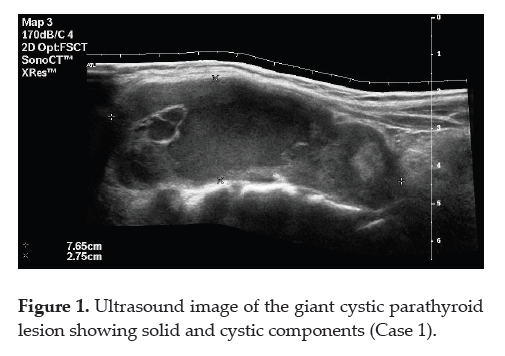 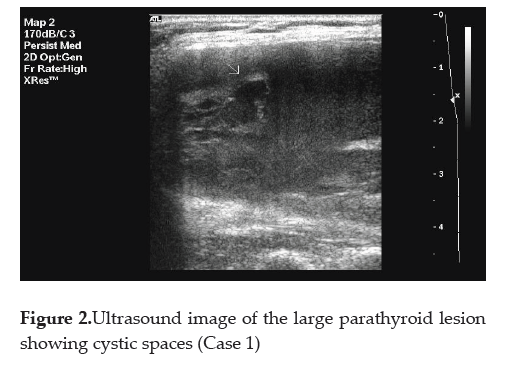 She underwent left parathyroidectomy and intra-op PTH levels decreased to 46.7pg/ml after 20 minutes. Histopathology showed 7 × 4 × 3 cm oval lobulated encapsulated mass, with solid and cystic areas (Figure 3). Microscopic examination confirmed parathyroid chief cell adenoma with cystic changes (Figure 4,5). Post operatively her calcium level dropped to 9 mg/dl and she recovered well from the surgery. She has been asked to undergo surgery for the renal calculus at a later date. 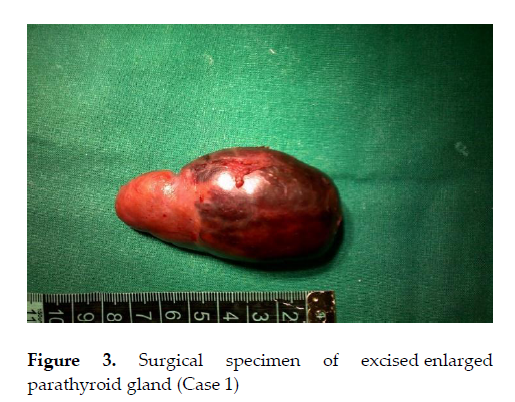 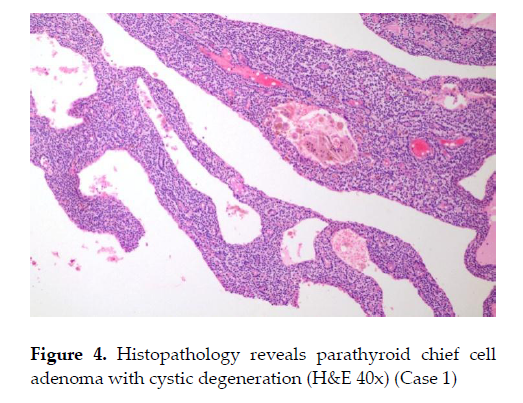 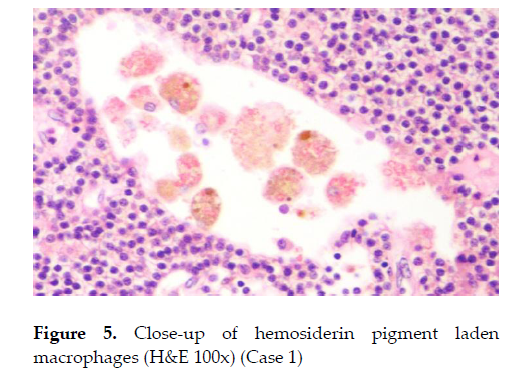 A 74-year-old female presented with increasing weakness, anorexia and constipation since a month prior to consult. Relatives noticed that she was sleepy throughout the day and had lost 4 kgs over the last 1 month. She was a known hypertensive for the past 10 years, well- controlled on a single oral antihypertensive agent. She was postmenopausal since 25 years ago. She had no history of renal calculi. On examination, there was no evidence of goiter or neck swelling. Systemic examination was normal. On evaluation, her serum calcium level was 18mg/dl, phosphorus 5 mg/dl, creatinine 2.3mg/dl, PTH 2138 pg/ml and 25 Vit D 49.5 ng/ml. An USG of the neck revealed a 3.6 x 2.5 cm cystic thyroid nodule on the right side with a 6 x 4 mm suspicious left inferior parathyroid nodule. Sestamibi scan showed persistent tracer uptake around the lower pole of the right thyroid gland suggestive of parathyroid adenoma. She underwent right inferior parathyroidectomy with intraoperative PTH levels declining to 350 pg/ml. Intraoperative findings revealed a 3 x 2 cm partly cystic nodule weighing 3.5gms. The left inferior parathyroid gland was normal. Microscopic examination confirmed parathyroid adenoma with cystic changes. Postoperatively her calcium level and creatinine normalized within 5 days.

A 62-year-old male presented with a gradually increasing midline neck swelling since 4 months ago together with bone pains and generalized weakness since 3 months ago. He had undergone left inferior parathyroidectomy 5 years back for primary hyperparathyroidism when he presented with bone pains, polyuria and renal calculi. Five years ago, he was also diagnosed to have hypogonadism secondary to empty sella and was advised androgen replacement therapy which he did not start. Clinically there was a 3 x 2 cm midline swelling in the neck, cystic in consistency, moving with deglutition. Systemic examination was normal. On evaluation, serum calcium level was 12.1 mg/dl, phosphorus 3.7 mg/dl, creatinine 1.0 mg/dl, PTH 257 pg/ml, 25VitD 10.7 ng/ml, T3 146ng/dl, T4 8.4 µg/dl and TSH 1.15 µIU/ml. An USG of the neck revealed a 2.9 x 1.9 x 1.9 cm (volume 5.2 cc) large, cystic, oval mass anterior to the isthmus with minimal peripheral vascularity. Sestamibi-SPECT scan showed persistent tracer uptake in the nodule anterior to the isthmus suggestive of parathyroid adenoma. A FNAC revealed parathyroid cell clusters and fluid PTH levels were 25000 pg/ml. As MEN1 syndrome was suspected (in view of recurrent primary hyperparathyroidism with hypopituitarism probably secondary to infarction of pituitary adenoma), he underwent total parathyroidectomy with reimplantation of half of a parathyroid gland in the forearm. Histopathology of the nodule weighing 16 mg revealed parathyroid hyperplasia. The other parathyroid glands were also found to be hyperplastic. Postoperatively his calcium level decreased to 7.8 mg/dl and he was treated with calcium and Vitamin D supplementation. Later, he was worked up for hypopituitarism and started on hormone replacement therapy on an outpatient basis.

A 52-year-old female presented with history of intermittent dysphagia for solids and liquids since 2 years ago. She had undergone upper GI endoscopy with dilatation on three occasions at different centers. On examination, she had neck fullness on the right with increased local warmth. Barium swallow showed proximal esophagus deviated to the left. A CT scan revealed a 9 X 5 X 3 cm soft tissue collection on the right paratracheal region displacing the thyroid gland anteriorly at C3-T2 level (Figure 6). She underwent excision of the cystic mass (hemorrhagic fluid). The swelling was reported to be a parathyroid cyst on histopathology. Unfortunately she was referred to us only after the histopathology reports. Preoperative calcium and PTH measurements were not available as this pathology was not suspected. Postoperatively her calcium levels were 9mg/dl, albumin 3.4mg/dl, phosphorus 2.6mg/dl and PTH 343 pg/ml.

Figure 6. CT scan of patient showing the cystic swelling on the right side of neck extending upto the tracheo-oesophageal groove (Case 4). 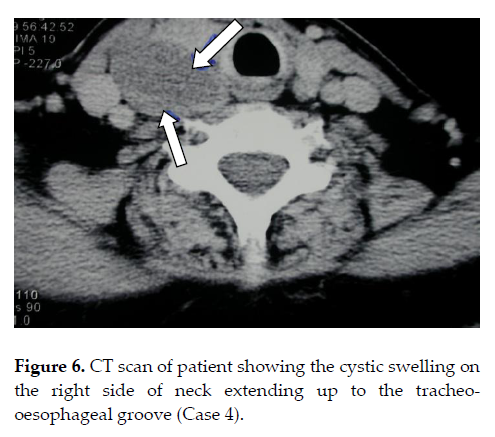 Parathyroid cysts are of variable sizes, ranging from 1 to 10 cm in greatest dimension, with the average cyst measuring approximately 3 to 5 cm. In 85 - 90% of cases, they are located in the neck and often involve the inferior parathyroid glands.2, 3, 5 In 5 - 10% of cases they have been detected at ectopic sites anywhere from the angle of the mandible to the mediastinum.5 The mediastinal location of the parathyroid cyst can be ascribed to two factors. First, the cyst may descend into the mediastinum because of the weight and negative intrathoracic pressure. Second, an aberrant mediastinal parathyroid gland may give rise to the cyst.2

Degeneration of an existing parathyroid adenoma secondary to hemorrhage into the adenoma, also results in cyst formation. The other different theories proposed are: (1) retention of glandular secretions, (2) persistence of vestigial pharyngobranchial ducts, (3) persistence of Kursteiner's canals, (4) enlargement of a microcyst, or (5) coalescence of the microcysts.2,6 None of these theories is universally applicable, and the processes leading to cyst formation may well differ from one person to the next.

The histologic distinction between a cystic parathyroid adenoma and the rare functional parathyroid cyst is made by the former having a preponderance of chief cells with multilocular degenerative thick-walled cysts and the latter usually consisting of a unilocular thin-walled cyst.

Treatment strategies for parathyroid cysts include surgical excision or aspiration or injection of sclerosing agents.1 Surgical treatment seems to be the preferred intervention for functional and symptomatic parathyroid cysts as in our patient.1 Fine-needle aspiration yields the diagnosis and may be considered the treatment of choice for nonfunctional parathyroid cysts. It leads to cystic regression without recurrence.1 Several reports in the literature support fine-needle aspiration as a therapeutic modality.1,7,8 For recurrent nonfunctional parathyroid cyst, sclerotherapy with use of tetracycline and alcohol has also been described. It has been effective but is associated with the risk of subsequent fibrosis and recurrent laryngeal nerve palsy.1 If aspiration cannot be done safely or the cyst recurs after successful aspiration, surgical excision should be done.5

2. Gurbuz AT, Peetz ME. Giant mediastinal parathyroid cyst: An unusual cause of hypercalcemic crisis—case report and review of the literature. Surgery. 1996;120:795-800.